28 octobre 2022 by Douglas Pierce in Vendôme Circle At Home

Genealogy of a Tablecloth

One of the more unique buildings in the area—one that forms a part of his daily landscape—is the Institut d’art et d’archéologie (the Institute of Art and Archaeology, co-operated by two of Paris’s universities). This edifice, designed between 1925 and 1928 by Paul Bigot, was built at the initiative of three professors at The Sorbonne and financed in great part by the Marchioness Arconati-Visconti. It housed—originally—the Library of Art and Archaeology of Jacques Doucet, since moved to the Institut national d’histoire de l’art (National Institute for Art History) within one of the complexes of the National Library of France.

The exterior of the building consists of a shell in red brick executed in an eclectic style with features from Italian Gothic and Romanesque architecture. The feature that interests us the most here is a series of bas-reliefs designed by the Sèvres Manufactory.

The frieze of terracotta reliefs reproduces famous works of world art including a frieze from the Temple of Antoninus and Faustina in the Roman forum. Engravings of this temple also feature in Les Édifices antiques de Rome dessinés et mesurés très exactement (1682) by the architect Antoine Desgodets. This work was designed for the use of young French architects and was republished in 1729 and 1779 and would have a lasting impact on French architecture. 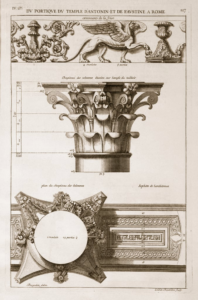 The decoration of the portico of the Temple of Antoninus and Faustina features griffins, acanthus leaf volutes and candelabra. It is this motif that appears on Vendôme Circle’s first set of table linens.

While acanthus leaves are a feature of Ancient Greek, and then Ancient Roman, architecture, the griffin’s origins go back much further in antiquity to Ancient Iran and Ancient Egypt. In the millennia that followed, the legendary creature would become a recurring motif in cultures all around the Mediterranean basin and throughout the Middle East and beyond.

In Ancient Greece these strange creatures pulled the chariots of Apollo and Dionysus, the preeminent gods of art and poetry. These divinities have long represented a priority of place given to the arts and culture and are therefore the symbolic patrons of Vendôme Circle.

In our desire to find a way to extend the Vendôme Circle experience into the home, we decided to start with the creation of table linens that reflect our values and mission. This particular motif seems a fitting way to begin. 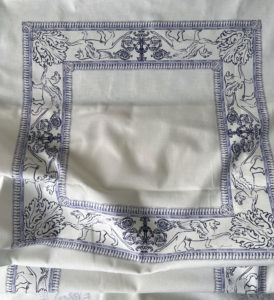 Our tablecloths and napkins contain within them echoes of millennia of history and, in particular, resonances from Ancient Greece and Rome and 17th- and 18th-century France that will come alive in modern-day homes. They celebrate our rootedness in ancient civilisation as well as in the modern world.

We have collaborated with the artist Konstantin Joachim, who worked to adapt the motif we chose to table linens. He artfully combined the frieze with other motifs that appear on the cornice of the temple—as well as in the Luxembourg Gardens, a short walk from the Institut d’art et d’archéologie.

We are very pleased with how our concept was translated into a work of art for the home and they will go very well with our afternoon tea gift bags, which will also be made available very soon.

Visit the boutique
0
Recommend
Share
Tagged in
Leave a reply

Sign up to receive news and updates from us